Press enter to begin your search

A voyage to Verona through lakes of wine 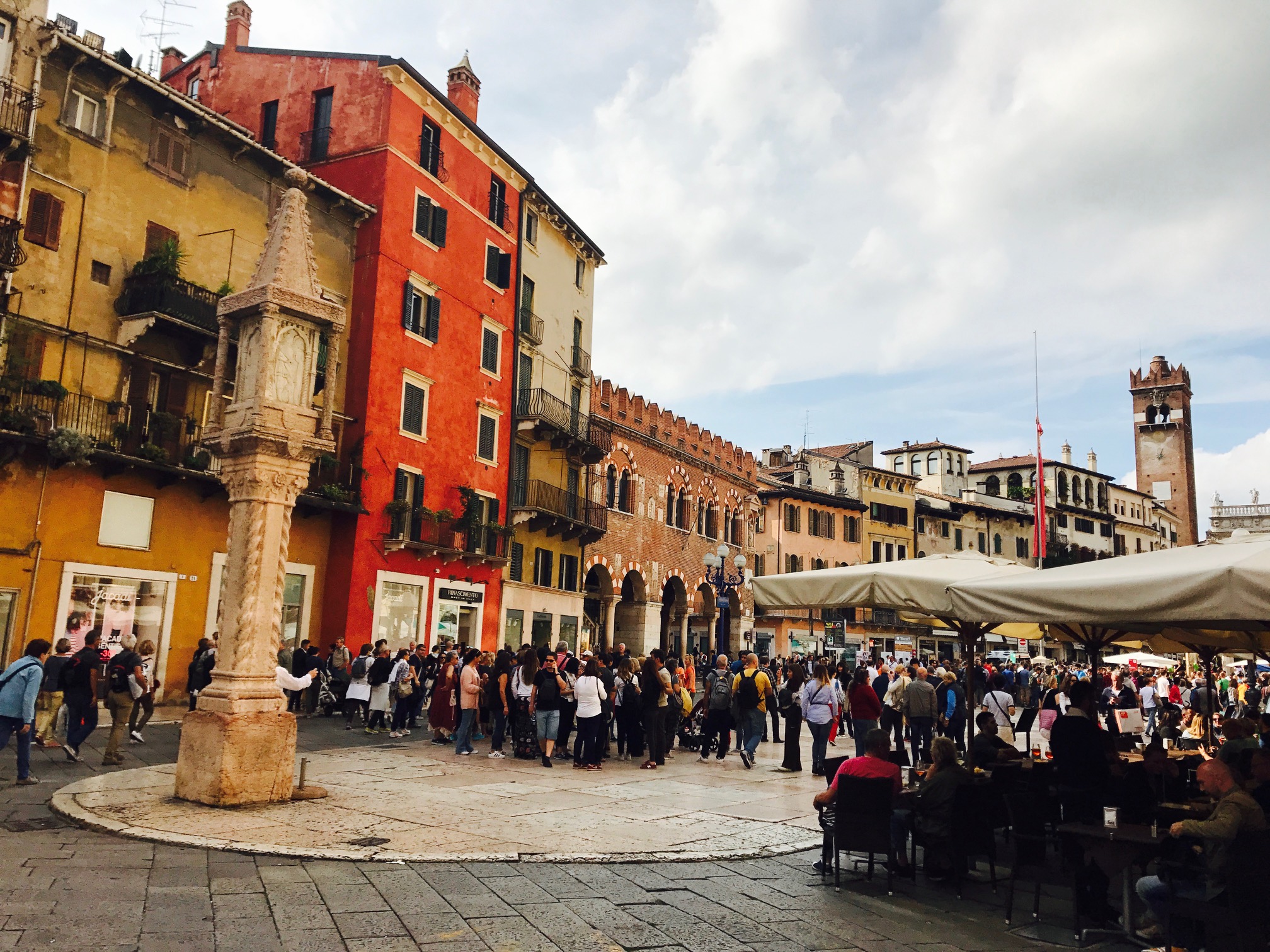 The Veneto region in Italy is a fascinating place. It extends from the mountain range it shares with Austria in the north, to the Adriatic sea in the east, with Lake Garda (Italy’s largest lake) in the west. Since about the 8th century it was part of the Venetian Republic and, after a bit of back and forth involving the Austrian empire and Napoleon it became part of the Kingdom of Italy in 1866. Veneto has a population of about 5 million people, its capital city is Venice, and most inhabitants speak both Italian and Venetian. It is a region of stunning natural beauty and fairy tale-like cities. This was my first visit to Verona and I was captivated by her marble lined streets, the winding river, Roman and medieval architecture, and the whispers of Shakespearean lovers. Venetian cities seem to have this effect on me – I have waxed lyrical about Padua in another post, and while I know many tourists love to hate Venice, I have loved her from the moment I set foot there as a teenage backpacker and she has remained under my skin ever since. 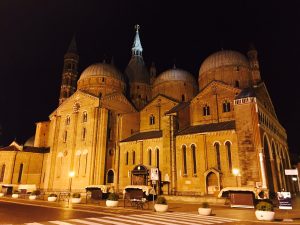 While eating and drinking is ubiquitously well done in Italy, in my experience, Venetians are particularly adept at the evening drinks and small plates dining scene. Verona and Venice are both fabulous cities to bar hop and dine in. Cichetti (Italian tapas-like small plates) bars abound, glasses of local wine and beer flow freely, and the relatively relaxed Italian approach to licensing allows for the spill of characteristically chic patrons onto the footpaths and into the squares, adding to the vibe of joyful celebration.

We had some memorable dinners in Verona. Ristorante Il Desco was the scene of our wedding anniversary dinner. We were served a delicious tasting menu of modern Veronese dishes accompanied by both local and international wines. The restaurant is warm and elegant with a very knowledgeable staff. Lunch at Ristorante 12 Apostoli was an interesting culinary and historical experience. This place has been serving food since the mid-18th century. We chose the local tasting menu and loved all five of the courses of traditional food. The Sommelier recommended a single bottle of Valpolicella Ripasso to match the whole lunch and his advice proved very sound. After lunch, we were shown around the restaurant’s wine cellar, a tour that has become particularly interesting in recent years as, during some routine maintenance work, tradespeople stumbled across a sacred temple dating back to the first century after Christ and parts of the foundations of a medieval tower house, all sitting below the cellar! This part of the restaurant is now an archaeological site that was excavated under the supervision of the Ministry of Heritage and Culture. Another eating and drinking venue I can highly recommend is Osteria del Bugiardo. It’s casual (in a chic, Veronese kind of way) and fun, you can get bar snacks or more substantial meals, all of which are super-tasty, the wine by the glass is tops and from the owners’ own local vineyards. We visited this place three times in three days! 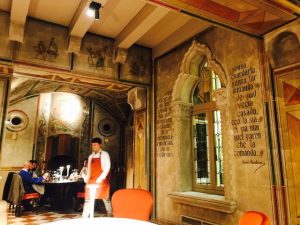 Now, onto the wine. Veneto produces the most wine out of all the Italian regions, in volume it produces roughly half as much as the whole of Australia. It is famous for Prosecco, Soave, Amarone, Valpolicella, and the very sweet and rich Recioto. Valpolicella is the viticultural zone and the wine there is made mostly from a blend of the grape varieties Rondinella, Corvina Veronese, and Molinara. Standard Valpolicella is usually made without oak and is drunk young. It is generally a fun, light, bright red wine with red fruit flavours. Valpolicella Classico denotes wines that are made from grapes grown in a particular part of the Valpolicella region, and Valpolicella Superiore are wines that are aged for at least 1 year and have at least 12% alcohol. Amarone is the biggest wine of the group, made from these same grape varieties however they are dried before being fermented, leading to a much richer and more concentrated wine with a very high alcohol content. Recioto is a sweet wine, made in a similar fashion to Amarone but the grapes are left to dry for longer. Recioto is a dessert wine that people who say they don’t like dessert wine (or ‘stickies’ as we call them in Australia) might enjoy, because although it is sweet, it is less viscous and sticky than many we are used to, and some even retain a bit of tannin. Valpolicella Ripasso falls in between on the taste spectrum – it is Valpolicella that has been macerated with the fermented lees of Amarone or Recioto, giving the wine more complexity, tannin and alcohol. During my time in Veneto, I tried different examples of all of these levels of Valpolicella reds and some of them were really wonderful. I am not generally a big fan of fruity, round, high alcohol red wines, but the good examples of Amarone that I had were perfect when paired with the rich meat dishes of the region. In fact, at Osteria del Bugiardo one night, we had fun working our way from the standard Valpolicella through Superiore, Ripasso, Amarone to Recioto, pairing the wine with increasingly heavy and complex dishes as we went. Actually, except the Recioto. I eschewed dessert (as usual) and had a glass of Recioto on its own instead. 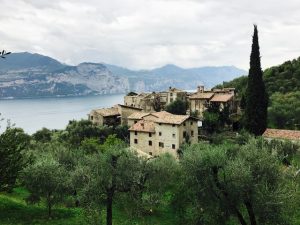 Throughout our time in Veneto, one producer that stood out in general was Pieropan. I was disappointed that I didn’t have enough time to visit the this winery, however I tried quite a few of their wines in restaurants in Verona and Lake Garda. Out of all the Soave wines I tried, the Pieropan Soave Classico was my favourite. Soave is the main white wine of the Veneto region, made from Garganega and Trebbiano grapes. Overall, I think it is hard to find offensively bad wine in this region, however, compared to other Italian regions, it seems easy to find wine that is quite boring. I wondered if there was a reason for this and so consulted my bible, the Oxford Companion to Wine, and learned that the Veneto region has been criticised for unscrupulously enlarging their DOC zones and allowing for very high yields, which has led to production of a high proportion of characterless wines. 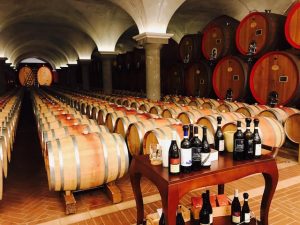 The downstairs tasting room at Zeni.

The Veneto wine area that I did have time to explore a little was Bardolino. Bardolino is on the shores of Lake Garda, another piece of stunning natural beauty in this region. While it is my understanding that Bardolino wine is just as vulnerable to the problems of high yields and relaxed standards in Veneto generally, we tasted some intriguing and lovely wine here. The Bardolinese should know a thing or two about winemaking – there is evidence of it being done in this area since the 8th century BC. Bardolino wines are made from the same grape varieties as Valpolicella but are allowed up to 20% of blending from several other grape varieties. Bardolino has DOC status and Bardolino Superiore (aged for at least one year) is a DOCG. The town of Bardolino has a wine museum inside the Zeni winery and is most certainly worth a visit, both to learn about the history of wine making in the area and to taste the Zeni wines. You can book a private tasting in the downstairs tasting room where you will be taken through a variety of their wines for a small fee. You can also do a more informal, and free of charge, tasting at the bar upstairs. However, the highlight of our wine touring in Bardolino was a visit to Le Fraghe winery. Le Fraghe is owned by Matilde Poggi, a woman who has been making wine in this area since 1984, and since 2009 has been growing wine grapes that are certified organic. Matilde is also the president of the Federazione Italian Vignaioli Indipendenti (Italian Federation of Independent Grape Growers) and is passionate about promoting the local wine industry. She is no stranger to innovation, and has been bottling some of her wines under screw cap since 2008 – a rare occurrence in Italy! 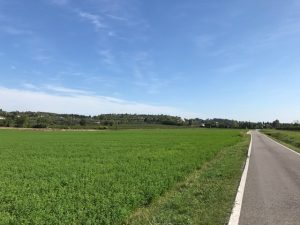 A road winding through the lush Bardolino area

To have a tasting at Le Fraghe you need an appointment as it is a small business without the all-day cellar door operation that Australians are accustomed to. We tasted all five of the current Le Fraghe wines and enjoyed each of them. Characteristic of the region, they are generally lighter in style but I found all of them interesting. My favourite was the standard Bardolino, made from 80% corvina and 20% rondinella with no other blending wines. It had a spicy and slightly floral nose, blue fruits and cherries on the palate, medium bodied with a little bit of tannin, excellent balance, and quite a bit of length. I had a pang of homesickness imagining drinking it with friends on a warm Brisbane evening with cheese and charcuterie or grilled meats. It is also surprisingly economical at 7 euro a bottle from the cellar door and only a whisper more than that in local restaurants such as Trattoria Villa (lunch here is worth a blog post on its own – it was enchanting and delicious). Alas, Le Fraghe does not ship to Australia, however they gave me the names of their importers – watch this space, I shall be doing some research to see if I can find this wine Down Under… 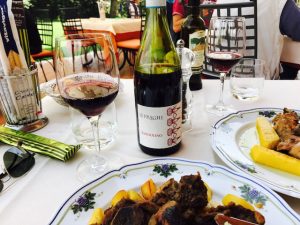